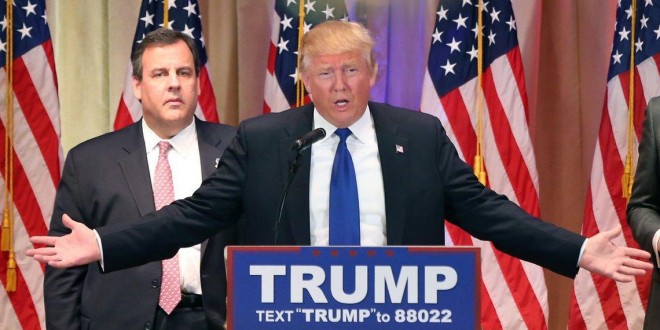 Petition To Chris Christie: Do Your Job Or Quit

Last night Twitter had a field day mocking Chris Christie as he stood blank-faced for more than 20 minutes while Donald Trump delivered his post-Super Tuesday victory speech/rant. Christie may have been thinking about the six major New Jersey newspapers who yesterday jointly called for him to resign. Today comes a petition which demands that very thing:

We have serious issues facing our state — but instead of doing the job, Governor Christie endorsed Donald Trump and he continues to travel around the country, once again putting his interests first and New Jersey last.

It’s time for Governor Christie to make a choice: Do the job or quit — and if you agree, then please take a moment to sign the petition.

Christie has been clear about his plans: Veto bills that would keep guns out of the hands of convicted criminals. Raid funding for lead abatement. Defund Planned Parenthood. Travel around doing anything to back Trump and his base of right-wing supporters.

And while Christie jets around the country to support Trump, New Jersey commuters are stuck on trains that run late and roads that are crumbling and clogged with gridlock.

The state’s transportation trust fund is broke. Our property taxes remain the highest in the nation. Our unemployment rate is the highest in the region. Our foreclosure rate is second to none. Either Governor Christie comes home and performs the job for which we continue to pay him or he needs to get out of the way.

From the editorial jointly published by those papers:

What an embarrassment. What an utter disgrace. We’re fed up with Gov. Chris Christie’s arrogance.

We’re disgusted with his endorsement of Donald Trump after he spent months on the campaign trail trashing him, calling him unqualified by temperament and experience to be president.

And we’re fed up with his continuing travel out of state on New Jersey’s dime, stumping for Trump, after finally abandoning his own presidential campaign.

For the good of the state, it’s time for Christie to do his long-neglected constituents a favor and resign as governor. If he refuses, citizens should initiate a recall effort.

Previous CHILE: US Mormon Leader Tells LDS Group “There Are No Homosexual Members Of Our Church” [VIDEO]
Next Ted Cruz – A Bad Lip Reading [VIDEO]