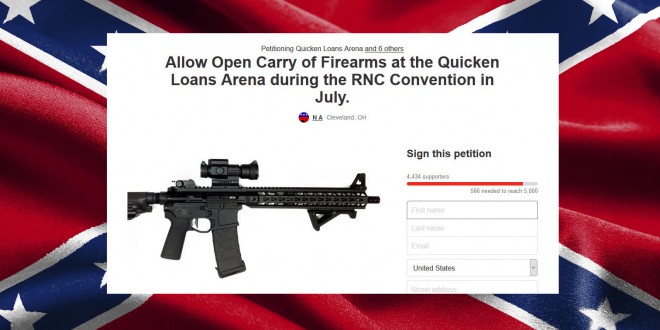 This is a direct affront to the Second Amendment and puts all attendees at risk. As the National Rifle Association has made clear, “gun-free zones” such as the Quicken Loans Arena are “the worst and most dangerous of all lies.” The NRA, our leading defender of gun rights, has also correctly pointed out that “gun free zones… tell every insane killer in America… (the) safest place to inflict maximum mayhem with minimum risk.” (March 4, 2016 and Dec. 21, 2012)

Cleveland, Ohio is consistently ranked as one of the top ten most dangerous cities in America. By forcing attendees to leave their firearms at home, the RNC and Quicken Loans Arena are putting tens of thousands of people at risk both inside and outside of the convention site.

This doesn’t even begin to factor in the possibility of an ISIS terrorist attack on the arena during the convention. Without the right to protect themselves, those at the Quicken Loans Arena will be sitting ducks, utterly helpless against evil-doers, criminals or others who wish to threaten the American way of life.

We are all too familiar with the mass carnage that can occur when citizens are denied their basic God-given rights to carry handguns or assault weapons in public. EVERY AMERICAN HAS THE RIGHT TO PROTECT AND DEFEND THEIR FAMILY. With this irresponsible and hypocritical act of selecting a “gun-free zone” for the convention, the RNC has placed its members, delegates, candidates and all US citizens in grave danger.

We must take a stand. We cannot allow the national nominating convention of the party of Lincoln and Reagan to be hijacked by weakness and political correctness. The policies of the Quicken Loans Arena do not supersede the rights given to us by our Creator in the U.S. Constitution.

I’d wish I could believe this is a prank. (Tipped by JMG reader David)