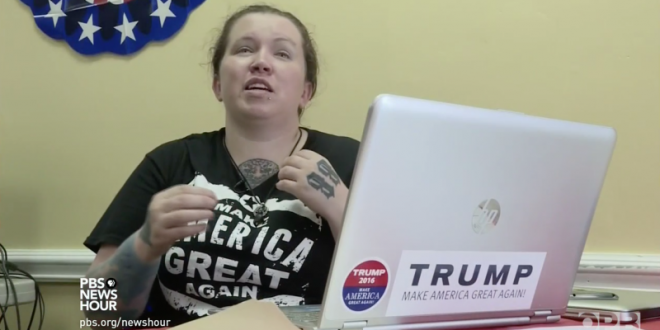 But apparently PBS didn’t notice the woman’s coded “Heil Hitler” tattoo on her left hand. Or her “White Pride Worldwide” tattoo on her right. It was Gawker that noticed:

Last night, PBS NewsHour ran a story on the Tilly family of Fayetteville, North Carolina. The Tillys do not have a history of being active in politics, but various members of the family—both old and young—are being motivated to vote or work for a campaign for the first time by Donald Trump.

Each of the number 8s on Tilly’s right hand stand for “H” – the eighth letter of the alphabet – and together they mean “Heil Hitler.” The Celtic cross on her left hand is widely used among white supremacists, often with the added text “White Pride Worldwide.”