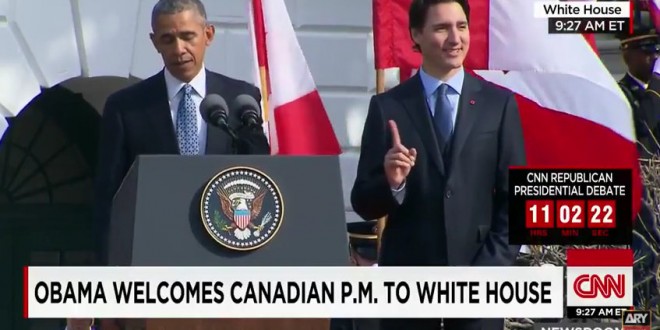 This morning Canadian Prime Minister Justin Trudeau met with President Obama at the White House, the first such visit by Canada’s head of government in nearly two decades. Obama welcomed the “quite good looking” internet heartthrob and proceeded to tease him about the current location of hockey’s Stanley Cup, which was last won by Obama’s hometown Chicago Blackhawks. More from Yahoo News:

The 54-year-old Obama has saluted Trudeau, 44, as political and generational kin, an ideological bedfellow who shares a belief in the importance of healthcare, gay rights and tackling climate change.

“I’m proud to be the first American president to stand with a Canadian prime minister and be able to say that in both our nations, healthcare is not a privilege for a few, but is now a right for all,” Obama said, touting his landmark healthcare reforms.

Trudeau echoed those remarks, saying “it’s wonderful to see that our American friends and partners share and are working on the exact same objectives.”