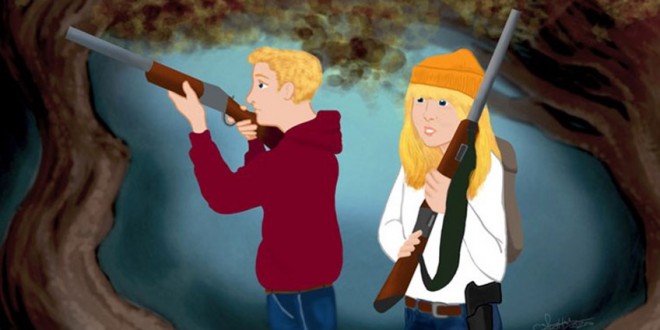 The gun lobby is facing criticism for rewriting a series of children’s fairy tales to put guns in the hands of beloved characters. The National Rifle Association (NRA) this year has released two stories — “Little Red Riding Hood (Has a Gun)” and “Hansel and Gretel (Have Guns)” — that arm the main characters with firearms. “Have you ever wondered what those same fairy tales might sound like if the hapless Red Riding Hoods, Hansels and Gretels had been taught about gun safety and how to use firearms?” the NRA asks readers.

Critics accuse the NRA of undertaking a “campaign to arm children.” “The NRA continues to stoop to new lows in the hopes of shoving guns into America’s youngest hands,” Dan Gross, president of the Brady Campaign to Prevent Gun Violence, said in a statement. The NRA, which did not immediately respond to a request for comment, teamed up with conservative blogger Amelia Hamilton to rewrite the fairytales.

From Hansel and Gretel (Have Guns):

The boys directed Hansel to the key that would unlock their cage while Gretel stood at the ready with her firearm just in case, for she was a better shot than her brother. Hansel unlocked the cage and opened the door. The hinges gave a groan and the sound of the witch’s snoring stopped, the silence filling the room as they looked at each other in panic. Gretel got her rifle ready, but lowered it again when the snoring resumed.

They helped the boys back out the window and hurried into the forest, breathing a sigh of relief when the cottage was out of sight. They knew they had to get home to their parents to get help with the witch. Thankfully, the moon was now high enough for its light to highlight the pebbles. Hansel and Gretel found their way back to the path and the four of them got back home as dawn was breaking.

From Little Red Riding Hood (Has A Gun):

“What big eyes you have,” Grandma gasped as she backed away.

“The better to see you with,” replied the wolf.

“What big ears you have,” She turned, with her back to the door.

“The better to hear you with,” the wolf said, coming ever closer.

“What big teeth you have!” Grandma said, as his fierce jaws came near.

“The better to eat you with!” the wolf threatened.

The wolf leaned in, jaws open wide, then stopped suddenly. Those big ears heard the unmistakable sound of a shotgun’s safety being clicked off. Those big eyes looked down and saw that grandma had a scattergun aimed right at him. He realized that Grandmother hadn’t been backing away from him; she had been moving towards her shotgun to protect herself and her home.

Previous Ted Cruz: Donald Trump May Be A Rat But I Have No Desire To Copulate With Him [VIDEO]
Next DAMAGE CONTROL: North Carolina Gov. Pat McCrory Issues “Myths Vs Facts” List On Anti-LGBT Law