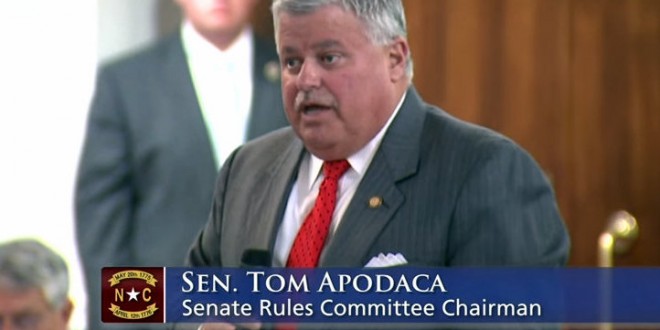 State Sen. Tom Apodaca (R-Henderson) has asked his staff to look and see how the General Assembly can charge Charlotte to cover the costs of Wednesday’s special session, including the possibility of withholding the city’s sales tax revenues.

Lawmakers met Wednesday and passed a law invalidating a measure the Charlotte City Council passed last month to allow transgender people to use restrooms corresponding with their gender identity.

“Charlotte brought this all upon themselves,” knowing exactly what they were getting into, Apodaca said.

The one-day special session convened at a cost of $42,000, according to the Associated Press, but Apodaca wondered if 18 senate Democrats who walked out on the Senate vote Wednesday deserved their per diem pay.

Apodaca said he absolutely does not see the Public Facilities Privacy and Security Act as discriminatory, and said the bill does not stop private businesses from offering a particular restroom if they so desire, but prevents government from mandating that they have to.

Previous Ted Cruz: Donald Trump Is Using His National Enquirer Henchmen To Smear Me With Adultery Claims
Next Trump: I Had Nothing To Do With That Cruz Story In The Enquirer, Which Is Often Right On These Things