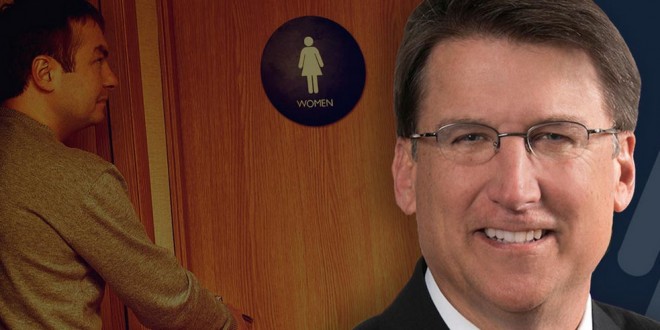 In response to near-universal criticism of North Carolina’s hate bill from the media, from big business, and from major political figures nationwide, the state’s Republican Senatorial Committee has launched a “Stand With McCrory” website so that haters can send messages of support to the governor. And of course, there’s a money beg link.

The site features the above image of a man entering a ladies room and notes that the campaign was authorized by state Senate Majority Leader Phil Berger, who has called for the resignation of state Attorney General Roy Cooper for refusing to defend the hate law in court.

The ACLU and other radical, left-wing special-interest groups are suing North Carolina to create an extreme national mandate forcing women and young girls to share locker rooms and bathrooms with grown men. Thank NC Governor Pat McCrory and Legislative Leaders for fighting to keep our children safe and passing a common-sense law to stop grown men from sharing locker rooms and bathrooms with young girls.