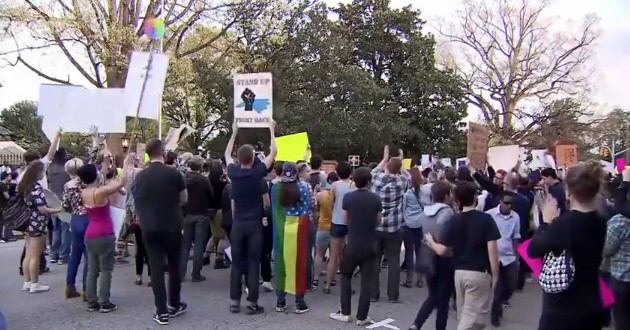 Five people were arrested after protesters blocked North Blount Street in front of the governor’s mansion in downtown Raleigh Thursday evening in response to Gov. Pat McCrory signing the state discrimination bill into law Wednesday night. Jade Brooks, 30, of Durham, Salma Mirza, 28, of Durham, Ngoc Tran, 20, of Durham, Jessica Jude, 27, of Durham, and Noah Rubin-Blose, 32, of Hillsborough, were charged with impeding the flow of traffic and with resisting, delaying or obstructing officers. All five were transported to the Wake County Detention Center. Officials said the arrests were made after the five protesters, who chained themselves to one another in the middle of the street, refused to disperse.

The law codifies a statewide nondiscrimination policy in employment and public accommodations, excluding gays and lesbians from protection, and prohibits North Carolina cities or towns from enacting stricter guidelines. A small group of people in the middle of the protesters that showed up on Wednesday night were one-by-one arrested and carried away. “All of these people are angry. They are upset,” said Micky Bee of the Transgender Law Center. “They have been left out of the democratic process.” Republican backers say the bill is about public safety.