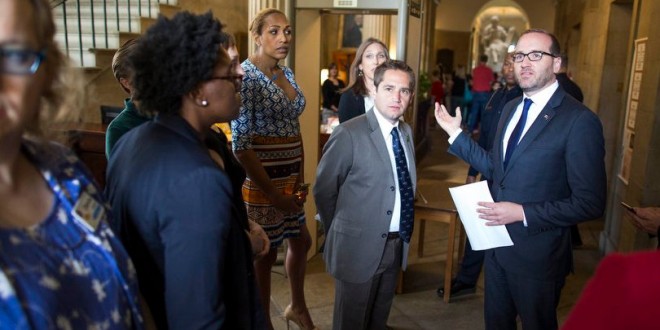 As a transgender woman of color, Cox-Daniels shared the lived experience and personal challenges she has faced. The three advocates urged Governor McCrory to convene a broader meeting with additional members of the LGBT community–and specifically transgender North Carolinians and their families–to discuss the impact of the radical and discriminatory new anti-LGBT law that was rammed through the legislature last week and signed by the Governor in the dead of night.

“In our meeting with Governor McCrory, we made crystal clear that HB 2 is discriminatory, shameful, and needs to be repealed immediately,” said HRC President Chad Griffin. “We also called on him to continue to meet with LGBT North Carolinians in the days and weeks prior to April’s legislative session. The question Governor McCrory faces is a simple one: will he seize this opportunity to show true leadership, or will he allow North Carolina to remain on the wrong side of history? This law is doing extraordinary damage to the state’s economic prospects, its reputation, and most importantly, it’s LGBT community. The nation is waiting and watching to see which path he will take.”

Opponents of the law declined to describe Gov. Pat McCrory’s response, and his office did not respond to messages seeking comment. Gay-rights advocates argue that companies may reconsider doing business in the country’s ninth-largest state. That’s unlikely in most cases, but the outsized megaphone and lobbying power of major corporations could reshape how prospective talent and investors perceive North Carolina as a place they want to be, business observers said.

“These companies have made long-term investments or are thinking about long-term investments in North Carolina” and won’t likely retreat solely due to this law, said DJ Peterson, who advises companies on political, social and economic issues as founder of Longview Global Advisors, a Los Angeles consulting firm. But as businesses showed Georgia this week, “the political pressure, the visibility they’re bringing to the issue, politicians do have to pay attention to it,” Peterson said.