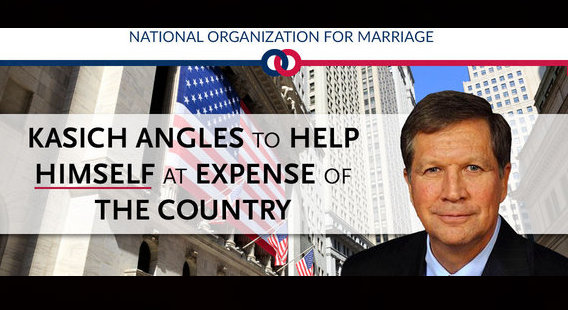 Brian Brown has issued yet another money beg in support of Ted Cruz because John Kasich doesn’t hate gay people as much as he should. Brown writes:

I’m asking for your immediate financial help so that we can get the truth about John Kasich out to voters and the media and stop any consideration of him as the GOP nominee, or even the vice presidential selection. Your membership contribution of at least $35 will go a long way toward helping us shine the light of truth on the Kasich record.

Kasich is the last of the so-called establishment candidates left in the presidential race. His weakness on social issues and lack of commitment to fighting for important principles is exactly representative of what’s gone wrong with Republican leadership in Washington. If you liked John Boehner, you’ll like John Kasich — lot’s of talk but no guts to actually fight for conservative principles like preserving marriage.

Here’s a classic example of what we’d get with John Kasich: he says that he personally believes in traditional marriage and that he didn’t agree with the Supreme Court’s decision to redefine marriage, but since then he says “he’s moved on,” that it’s time to for the nation to accept it and that he had a great time attending a gay ‘wedding’ himself. And Kasich believes that someone who does not want to be involved in providing services to a same-sex ‘wedding’ should be forced to do so against their religious beliefs if they want to be in business. “We’re not going to allow discrimination,” he promised.

What Governor Kasich apparently doesn’t realize is that it is people of faith who are being discriminated against by LGBT activists, forced to participate in something they consider deeply wrong. All across America, bakers, florists, photographers, inn keepers and others are being targeted and punished simply because they do not want to personally be involved in supporting a same-sex ceremony that violates their beliefs. Meanwhile, there has not been a single situation where a gay couple has not been able to obtain the services they desire associated with their ‘wedding.’

NOM is one of the few groups willing to take on the politically-correct yet powerfully wrong elite in America, which is what John Kasich represents. But to be effective, we need to increase our membership dues from grassroots supporters like you. Please act today to make a membership contribution of at least $35 which will allow us to take the fight to Kasich and others who disrespect the importance of marriage and refuse to protect the rights of average Americans to live out their beliefs about marriage in their daily lives.

People like Aaron and Melissa Klein are not advocates or revolutionaries; they are simple small business people and faithful Christians. They did not go looking for any trouble with anyone, but trouble came looking for them. When a gay couple in Oregon demanded they bake a cake to celebrate their ‘wedding’ the Klein’s politely explained that they couldn’t do so because of their Christian faith. There are plenty of others with no religious objections who would happily bake their cake, but the LGBT extremists want to force everyone to do so, especially faithful Christians. So these activists used their power to get the state to fine the Klein’s $135,000 and demand that they go through “reeducation” training. The young couple’s business has been destroyed.

John Kasich would do nothing to help the Klein’s or anyone else who is forced to give up their constitutional rights when it comes to gay ‘marriage,’ and he could very well make things worse. That is why NOM is committed to ensuring that the American people learn the truth about Kasich and make him toxic as a potential vice presidential pick.

Please make your membership contribution of at least $35 today so that we can ramp up our efforts to derail Kasich, the last remaining establishment Republican who has abandoned us when we needed him most. If you can afford to give more than the minimum $35, please do so.

Thank you for standing strong for God’s design for marriage, and for helping us fight the PC crowd that refuses to stand with us for the truth of marriage and religious liberty.