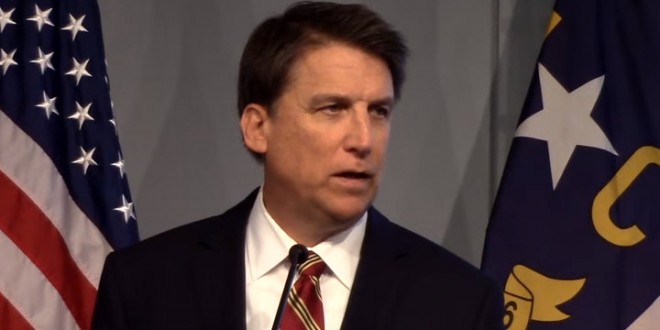 By promoting the ludicrous idea that transgender women are inherently dangerous, the law endangers citizens who are already disproportionately vulnerable to violence and stigmatization. Transgender men go largely unmentioned in bathroom bill debates, but that could change. James Parker Sheffield, a transgender man with a beard, exposed the foolishness of the law in a tweet to the governor. “It’s now the law for me to share a restroom with your wife,” he wrote, attaching a photo of himself.

North Carolina could face serious economic repercussions from the law. It can expect a backlash from leading employers, a potential cut in federal education funding and lawsuits challenging the constitutionality of the law. American Airlines, which has a hub in Charlotte, and PayPal, which recently announced it would create 400 jobs in the state, are among several companies that have already criticized the law.

Mr. McCrory, who is running for re-election, may have assumed the bill would help him in a tight race against Attorney General Roy Cooper, a Democrat who called the measure shameful. “Not only does this hurt North Carolina families, but it hurts our economy as well,” Mr. Cooper said in a video message. Voters should reject the candidate who made the state a pioneer in bigotry.

@PatMcCroryNC It’s now the law for me to share a restroom with your wife. #HB2 #trans #NorthCarolina #shameonNC pic.twitter.com/4b4OdmfmeN