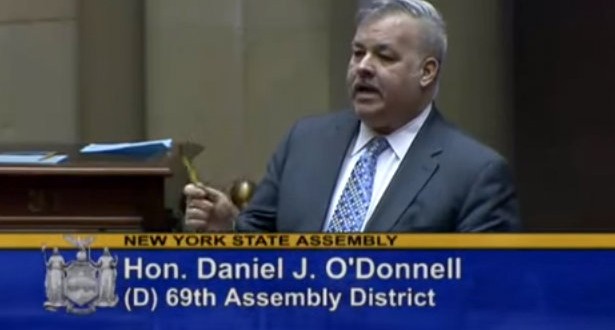 Assemblyman Matthew Titone, who, like O’Donnell is openly gay, supported the bill even though he’s not a fan of the sport. “If I wanted to see half naked men fighting in a cage over a belt and purse, I’d go to Fire Island,” he joked. O’Donnell said the “aggression and violence” of the sport doesn’t “make me necessarily comfortable.”

He said supporters of legalizing the sport often say they want to watch matches in New York. But O’Donnell argued there’s plenty of things he’d like to see at Madison Square Garden but can’t. He didn’t specify.

He also said he’s heard from his famous sister asking that he vote to legalize the sport. He was not happy and said she probably wouldn’t appreciate him calling her to go back to her old show, “The View.”

His joke about Fire Island aside, Titone’s comments about MMA won praise from the sport’s fans on Twitter. The bill was approved and Gov. Cuomo will sign it into law shortly.