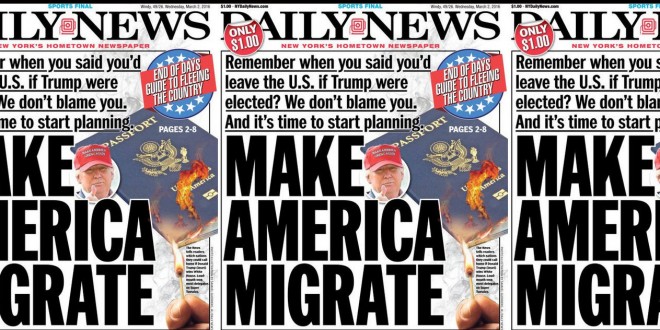 If you can’t beat him, leave. The front page of the New York Daily News bellows a provocative spin on Donald Trump’s campaign slogan: “Make America Migrate” — a day after the billionaire’s dominant Super Tuesday in which he won seven states, increasing the likelihood that he wins the Republican nomination and challenges the Democratic nominee for the White House.

Trump often takes credit for bringing immigration to the forefront during the announcement of his presidential campaign last summer, and the Daily News on Wednesday made emigration an issue. “Remember when you said you’d leave the U.S. if Trump were elected?” the newspaper asks in a bold, underlined font. “We don’t blame you. And it’s time to start planning.”

The Daily News brands the newspaper with a red, white and blue logo that says “End of days guide to fleeing the country” in all-caps. All told, the News dedicated pages two through seven to making America migrate.

This morning Google reports that searches on “Canadian immigration” spiked by 350% last night. Previous TRAILER: Finding Dory
Next CHILE: US Mormon Leader Tells LDS Group “There Are No Homosexual Members Of Our Church” [VIDEO]