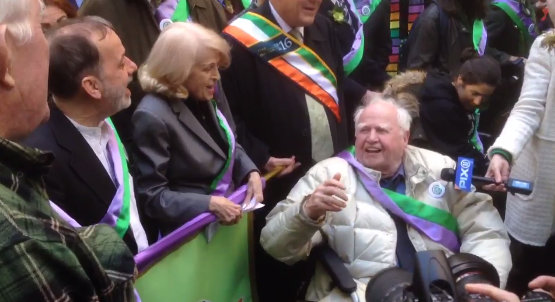 DOMA champion Edith Windsor and Irish activist Brendan Fay were among the LGBT luminaries marching today behind the own banner for the first time in the 255 year history of New York City’s St. Patrick’s Day Parade. NBC New York reports:

Security was tight as 200,000 marchers strode up Fifth Avenue beginning at about 11 a.m., bagpipes and horns blaring. This year’s St. Patrick’s Day parade — the world’s oldest and largest — also proved to be a historic one, as openly gay and lesbian groups were allowed to march in the parade, ending a quarter-century long ban.

“I never thought I’d see the day when I could march up Fifth Avenue in the St. Patrick’s Day Parade with my husband,” said Brendan Fay, chairman of the Lavender and Green Alliance, as the parade began. “When we started in 1991, after getting arrested so many times for protesting the parade, wow, what a moment this is.”

Mayor de Blasio marched with the Lavender and Green Alliance, marking the first time he had participated in the festivities as mayor. He boycotted the parade his first two years in office because the march excluded gay and lesbian advocacy groups. “Today everyone is celebrating together,” de Blasio said. “The city is at peace and unified.”

There is nothing inclusive about the NYC St. Pat's Parade–pro-life Catholics are still banned. And the new gay group is led by a bigot.

25 years in the making. Marching in the #StPatricksDay Parade with Lavender and Green. #Equality #Finally #LGBT pic.twitter.com/hpuOrhCLWk

GLAAD's @sarahkateellis talking with media before walking with the Irish LGBT group at the NYC #StPatricksDay parade pic.twitter.com/w2T6T3q2fx

RELATED: For some historical perspective, watch the abuse hurled at LGBT protesters in the early 90s.

Previous Laura Bush: Don’t Ask Me About Voting For Trump
Next Alex Jones: Satan Is Trying To Steal Space Travel From Humanity And Only Trump Can Stop Him [VIDEO]