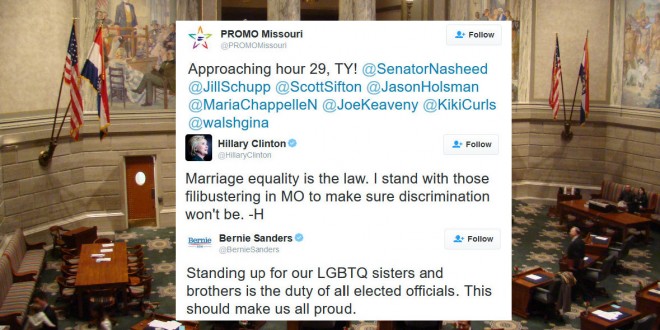 INCREDIBLE. From the St. Louis Post-Dispatch:

Missouri is grabbing national headlines as word of Senate Democrats’ day-long filibuster spreads. A proposal by Sen. Bob Onder, R-Lake Saint Louis, is designed to protect wedding vendors and clergy from legal liability and government penalties if they decline to participate in same-sex marriage ceremonies.

Republicans are trying to put the question on the ballot this year in the form of a proposed constitutional amendment. To do so, the measure only needs approval from the House and Senate.

Proponents say churches in other states have had their tax-exempt statuses threatened. They’ve also used an example from Oregon, where a baker was ordered to pay damages for declining to bake for a same-sex wedding, as a reason for why the amendment is needed.

But Democrats charge that clergy are already protected under the First Amendment, and that the proposal does little more than codify discrimination against gays in the state constitution.

This is unprecedented. Listen live here.

Dow opposes Missouri Senate Bill #SJR39 and any efforts that allow for discrimination of any colleague or citizen. pic.twitter.com/jb10JnJIWp — Dow (@DowChemical) March 8, 2016

We call on other businesses and the ag community to join us in speaking out against discrimination in Missouri and around the world. #SJR39