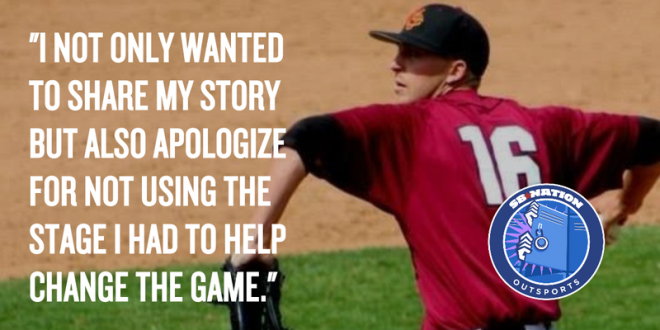 Last season, gay minor-league pitcher Tyler Dunnington stepped away from baseball after dealing with hateful speech from teammates and coaches. In an email to Cyd Zeigler of Outsports, Dunnington detailed why he felt he needed to leave the game he loved.

Dunnington was not out to his teammates when he played, and that led to some awkward, and awful, exchanges among teammates. The worst of which came from a coach who said “we kill gay people in Wyoming” in reference to 21-year-old Matthew Sherpard, who was brutally murdered in 1998 because he was gay.

Teammates also engaged in anti-LGBT talk. After finding out one teammate had a gay brother, some of the club questioned how that teammate could remain close with his sibling. They also “mentioned ways to kill gay people,” according to Outsports.

Dunnington has come out now, and looking to return to the game after a year away. His playing career may be over, but Dunnington is hoping to join a team’s front office.

From his letter to Outsports:

My name’s Tyler Dunnington, and I was a 28th-round pick by the St Louis Cardinals in the 2014 MLB Draft. I was one of the not-so-many players to be given a chance to pursue my dream of being a Major League Baseball player.

I was also one of the unfortunate closeted gay athletes who experienced years of homophobia in the sport I loved. I was able to take most of it with a grain of salt but towards the end of my career I could tell it was affecting my relationships with people, my performance, and my overall happiness.

I experienced both coaches and players make remarks on killing gay people during my time in baseball, and each comment felt like a knife to my heart. I was miserable in a sport that used to give me life, and ultimately I decided I needed to hang up my cleats for my own sanity.

In the video below Dunningham has fairly light-hearted chat with Outsports founder Cyd Zeigler.