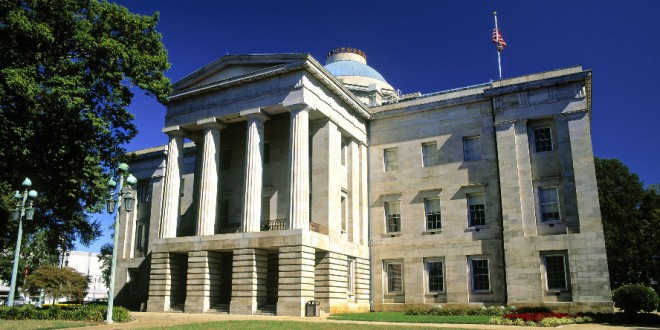 Yesterday major corporations took to social media or released statements to denounce North Carolina’s new anti-LGBT law. See some of their messages below. Perhaps most prominent among them is IBM, the state’s largest private employer. Fortune reports:

Big Blue, North Carolina’s largest employer, posted a statement on Thursday that expressed disappointment with the new law, which LBGT rights supporters widely view a setback. The law short-circuited a Charlotte ordinance that would have let transgender men who identify as women use the women’s bathroom.

“This measure will reduce, rather than expand, the scope of anti-discrimination protection in the state,” the company said. It added that it would “continue to follow its global non-discrimination policies in the workplace, and believes that an inclusive and welcoming environment is the best way to attract talented individuals to our company.”

It is unclear whether IBM IBM 1.75% will do anything beyond criticizing the law. But the company’s strongly-worded stand does come just weeks after Salesforce CEO Marc Benioff threatened to pull his company’s upcoming Connections conference from nearby Georgia if that state’s governor fails to veto a “religious liberty” bill that is viewed by some as discriminatory against gay people.

IBM is disappointed by passage of #HB2 in NC since it reduces scope of anti-discrimination protections in state https://t.co/lqf9dvtCw7

We have zero tolerance for discrimination. We say NO to #NCGA. We continue to support all of our employees & remain on the side of equality. — Bayer US (@BayerUS) March 24, 2016

We believe in equal rights and equal treatment for all. This North Carolina law is misguided & wrong. #WeAreNotThis pic.twitter.com/3yCayn7Tum

Citrix believes in a world that is secure & open for all. We value diversity in our workforce & lives. #WeAreNotThis pic.twitter.com/jvz1YTkKz0 — Citrix (@citrix) March 24, 2016