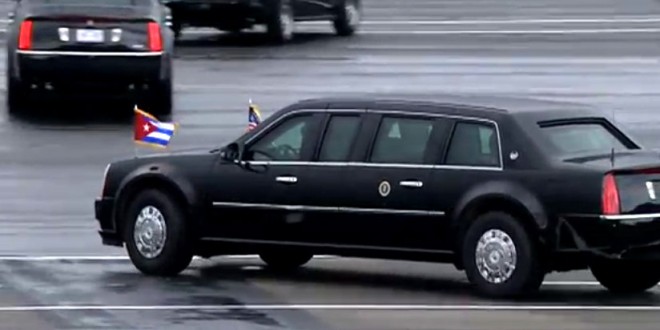 President Obama has just landed in Havana for his historic visit to Cuba. Watch below. Via Yahoo News:

The three-day trip, the first by a U.S. president to Cuba in 88 years, is the culmination of a diplomatic opening announced by Obama and Cuban President Raul Castro in December 2014, ending a Cold War-era estrangement that began when the Cuban revolution ousted a pro-American government in 1959.

Obama, who abandoned a longtime U.S. policy of trying to isolate Cuba, wants to make his shift irreversible. But major obstacles remain to full normalization of ties, and Obama’s critics at home say the visit is premature.

Traveling with first lady Michelle Obama, her mother and their daughters, Sasha and Malia, the president will mostly play tourist on his first night on the Caribbean island, taking in the famous sights of Old Havana.

He will hold talks with Raul Castro – but not his brother Fidel, the revolutionary leader – and speak to entrepreneurs on Monday. He meets privately with dissidents, addresses Cubans live on state-run media and attends an exhibition baseball game on Tuesday.

The trip carries both symbolism and substance after decades of hostility between Washington and Havana. It makes Obama the first sitting American president to visit Cuba since Calvin Coolidge arrived on a battleship in 1928.