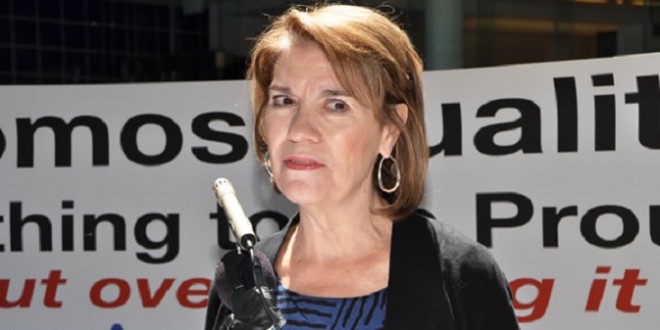 “North Carolina’s GOP leaders did not cave to pressure from the NBA, now proudly inclusive of depravity, which threatened to move the All-Star game. What happened to real men in pro sports? Or are their spiteful lesbian lawyers calling the shots? Time for some boycotts, sports fans. The battle in Atlanta came from homosexual allies in the business community, with Coca-Cola, Delta and others siding with sodomy and against Christians. Brave GOP legislators in Georgia passed the measure ensuring that Christian organizations are not forced to hire or retain employees in conflict with their religious faith, and that no pastor can be forced to perform or attend homosexual ceremonies.

“Disney, Marvel and Viacom said they wouldn’t make films in Georgia if the bill became law. The NFL was hinting that Atlanta wouldn’t be considered to host a future Super Bowl if the bill became law. Where are the real men? Come on, players; you don’t all agree with this position by the league! Someone speak out and say so. We can pray that the Georgia Legislature does the right thing and enacts an override of Deal’s veto.

“Let’s support Republicans who do the right thing. Let’s also work diligently to get the cross-dressers – that is, those who run as conservatives but govern like liberals – out of office, to be replaced with brave warriors ready to face the pink Goliath. He’s not so scary. Just ask David.” – Hate group leader Linda Harvey, writing for World Net Daily.