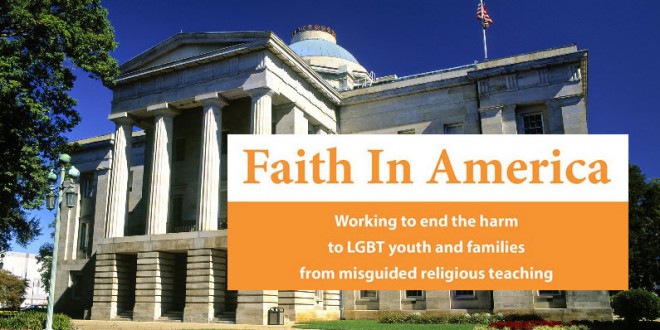 The LGBT religious group Faith In America gets to the core of North Carolina’s hate bill:

Yet again, the religious right has hijacked religious narratives to justify their anti-LGBT bigotry. Ill-informed and misguided religious beliefs are being used against the transgender community in North Carolina.

“North Carolina revoked a basic human right for their transgender community — to use public restrooms,” Eliel Cruz, Executive Director of Faith In America said. “Forcing transgender Americans to find the rare single person gender neutral bathrooms or hold it until they’re home takes away their dignity. Waiting longer to use the restroom then when feels natural also can have serious health risks. All around, this piece of legislation is not only absurd but also dangerous.”

Despite all the evidence to the contrary, North Carolina’s Republicans bought and sold a “bathroom sexual predator” narrative that vilified the transgender community. This bathroom predator myth has been debunked again and again with not a single documented time it occurred. In reality, transgender people are more likely to be victims of crimes then the perpetrators.   Furthermore, this law affects more than the LGBT community. This legislation eliminates recourse from anyone fired from their job based on race, religion, age, or handicap.

“This is not about religious freedom as many have claimed. There is no Christian doctrine that requires binary gendered bathrooms as part of religious practices,’” Cruz said. “As a Christian, I’m ashamed that others are using their religious beliefs as a vehicle to legislate hate. North Carolina’s bill is fueled by transphobia plain and simple.”

Faith In America was founded in 2006 by activist and businessman Mitchell Gold. NOT incidentally, Gold is also the co-founder of the North Carolina-based furniture design and manufacturing company Mitchell Gold + Bob Williams, which has retail showrooms in many states.

PREVIOUSLY ON JMG: In 2014 Faith In America teamed up with NYC’s Ali Forney Center to publish a full-page ad in the New York Times calling on Pope Francis to stop condemning LGBT people.