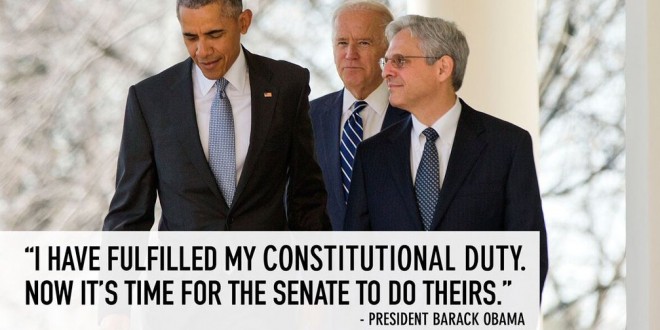 “With President Obama’s nomination of Judge Garland to the Supreme Court, we call upon members of the Senate Judiciary Committee to fulfill their constitutional duty and ensure Judge Garland is given a complete and timely review. We encourage them to ask comprehensive and probing questions to evaluate Judge Garland’s ability to be a fair and impartial member of our highest court rather than rejecting his nomination out-of-hand in partisan fashion, without even a hearing.

“Despite the recent Supreme Court victory that made marriage equally available to same-sex couples throughout the United States, numerous issues that are critically important to the LGBT community are likely to come before the Court again soon. These include the constitutionality of sweeping, ardently anti-LGBT laws masquerading as religious freedom protections; the legality of anti-transgender policies designed to bar equal access to public spaces; the protection federal employment discrimination laws provide to LGBT workers; and the constitutionality of harsh and discriminatory HIV criminalization laws. Lambda Legal often appears before the Supreme Court and we are acutely aware of how important it is that its justices be committed to our Constitution’s guarantees of equality, justice and fairness for all and that the Court not face tie votes that fail to resolve open issues nationally.

“We hope that the progress we have spent decades fighting for will continue once the vacancy is filled. We again demand that the members of the Senate Judiciary Committee meet their constitutional obligation and promptly move forward with the confirmation process. Recent polling shows that two-thirds of all Americans believe hearings should occur. All Americans, not just a select few, need justices who will uphold the Constitution and ensure that its guiding principles are applied equally to protect everyone in our nation.”

“Americans deserve a full Supreme Court bench, and President Obama’s nominee deserves a hearing. There is no doubt that Merrick Garland is a highly qualified candidate, and the Senate has a Constitutional responsibility to give him swift and fair consideration,” said HRC President Chad Griffin. “The Supreme Court has a sacred responsibility to uphold the rights of all citizens, and we must hold accountable any politicians who tamper with our nation’s highest court for their own gain.”

Judge Garland has served on the federal bench and in public service for almost 25 years. He was appointed by President Bill Clinton in 1997, and currently serves as the Chief Judge on the United States Court of Appeals for the District of Columbia Circuit. After graduating from Harvard University and Harvard Law School, Judge Garland served as a judicial clerk for Judge Henry Friendly on the U.S. Court of Appeals for the 2nd Circuit, and for U.S. Supreme Court Justice William Brennan. HRC will continue examining the record of Judge Garland on issues affecting the LGBT community. Moreover, we look forward to the Senate’s thorough examination of his judicial philosophy and record.

The decisions made by the Supreme Court establish important legal precedents that impact the daily lives of all Americans, including those who are LGBT. This year alone, the Court is expected to rule on many critical issues–including affirmative action, immigration, religious refusals and abortion rights–and the American people deserve a fully-functioning Court with nine justices seated and considering cases before it.

Merrick Garland, 63, is the chief judge for the U.S. Court of Appeals for the D.C. Circuit. https://t.co/ope5lEgyCp pic.twitter.com/VLmOH7p2EU