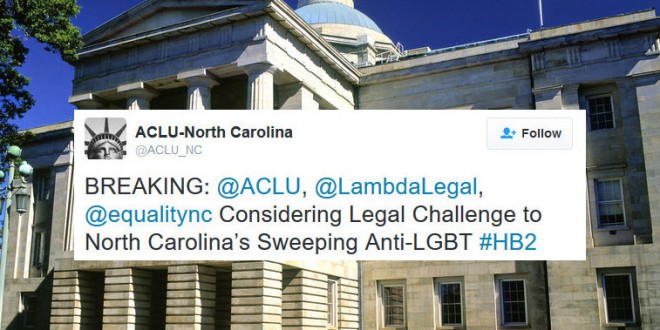 Legal Groups To North Carolina: Get Ready For Lawsuits

“We expect the ACLU’s and Lambda Legal’s Legal Help Desks will light up with calls from those who suffer discrimination imposed by this law, and we stand ready to help,” said Tara Borelli, Senior Attorney with Lambda Legal. ”This law is in direct conflict with protections provided to students under Title IX and could cause the state to lose billions in federal funds. Instead of solving any real problems, the law would create new ones and could lead to intolerable and unfair conditions for transgender students who are entitled, by federal law, to a safe and equitable education.”

“Today was a devastating day for LGBT North Carolinians and particularly our transgender community members who have been subjected to months of distorted rhetoric culminating in today’s display of bias and ignorance by North Carolina lawmakers. We are disappointed that Governor McCrory did not do right by North Carolina’s families, communities, and businesses by vetoing this horribly discriminatory bill, but this will not be the last word,” said Chris Brook, Legal Director of the ACLU of North Carolina. “The ACLU, Lambda Legal, and Equality NC are reviewing all options, including litigation.”

“HB 2 is an undisguised attack on LGBT people and the efforts of one city to protect gay and transgender North Carolinians against discrimination,” said Chris Sgro, Executive Director of Equality NC. “This cruel and insulting bill is about more than bathroom access, it’s about fairness in employment, education, and local governance. It aims to override local school board policies, local public accommodations laws, and more. This law also violates many other federal statutes and the United States Constitution by attempting to mandate discrimination in government buildings”