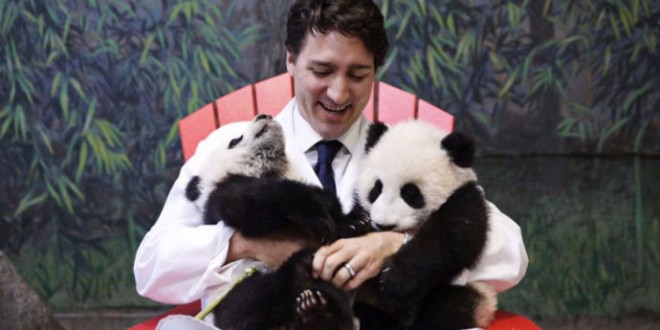 If you have an internet machine, you’ve surely seen the above photo tweeted out over the weekend by Canadian Prime Minister Justin Trudeau. Satirist Andy Borowitz writes for the New Yorker:

The photo, taken at the Toronto Zoo and showing Justin Trudeau cuddling with two panda cubs, was “the last thing this country needed,” Harland Dorrinson, the executive director of Canadians for Responsible Immigration, a prominent anti-immigration organization based in Ottawa, said.

“Canada is already staring down the potential crisis of millions of Americans pouring over its border later this year,” Dorrinson said. “Did we really have to announce that we have pandas, too?”

The news photo, which Dorrinson called “an unmitigated disaster,” is expected to worsen the influx of illegal Americans because, he said, “in addition to pointing out that Canada has pandas, it is also reminding people that our Prime Minister is an unusually handsome man, especially for someone in government.”