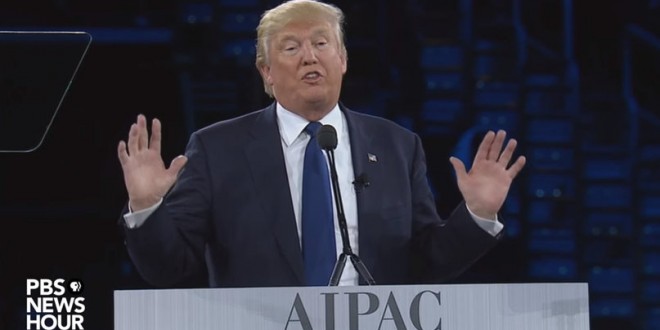 In an emotional apology, the AIPAC leadership expressed regret to President Barack Obama for an attack on him from its stage by Donald Trump, and for the loud applause it earned. “While we may have policy differences, we deeply respect the office of the President of the United States and our President Barack Obama,” Lillian Pinkus, the newly installed president of the American Israel Public Affairs Committee, said Tuesday, joined by other AIPAC lay and professional leaders.

AIPAC’s evident anguish in the aftermath of Trump’s remarks could undercut the hopes that the Republican front-runner’s speech to the lobby would somehow help bring him into the mainstream. There are people in our AIPAC family who were deeply hurt last night and for that we are deeply sorry,” Pinkus said, her voice choking. “We are deeply disappointed that so many people applauded a sentiment that we neither agree with or condone.”

Launching a critique of Obama’s U.N. policy, Trump, a real estate magnate, had begun a sentence Monday evening, “With President Obama in his final year –“ Then he stopped himself and said “Yay!” Cheers and laughter and applause arose from the crowd of 18,000 packed into the Verizon Center, a sports arena used by the lobby for the first time to accommodate record breaking numbers.

RELATED: Hundreds of AIPAC attendees, including a coalition of rabbis, walked out during Trump’s speech in a pre-planned demonstration.

Trump received applause from the crowd as he spoke about being a strong supporter of Israel, and his plans to dismantle the recent Iran nuclear deal. Speaking in a well-prepared speech while looking at a teleprompter, the former host of “The Apprentice” laid out his vision for the future relationship between the United States and Israel. While Trump did have his supporters, others weren’t so pleased. With a packed house, many walked out during Trump’s speech in protest to his alleged “bigotry” and “racism” as Rabbis gathered outside for a religious study. The number reached in the hundreds including those protesting outside the arena, and those who walked out during the speech.