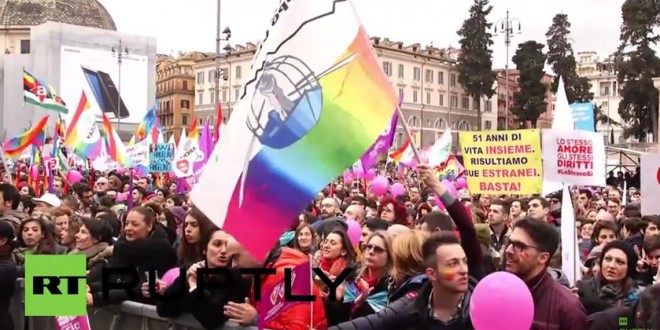 Thousands of gay rights activists and LGBT families rallied in Rome to protest against the watering down of Italy’s civil unions bill, which no longer envisages adoption rights for homosexual couples.

Protesters carried banners that read “We want equality” and sported the gay pride rainbow on their faces, with one man naked apart from a cardboard fig leaf with the words “civil unions” on it.

Activists say the bill, which had to be cut back to the bare bones to pass in the senate and is now being examined in the lower house, is only a small step towards securing rights for homosexual families.

They are particularly angry over the scrapping of a clause which would have allowed gay people to adopt their partners’ biological children – a proposal the prime minister, Matteo Renzi, was forced to dump under Catholic pressure.

“Today in Italy, in 2016, we still have to beg for charity, for crumbs, in terms of rights. We want equal weddings, adoptions and full rights. Full rights,” Alessia Avellino, a 21-year old sociology student, told AFP.