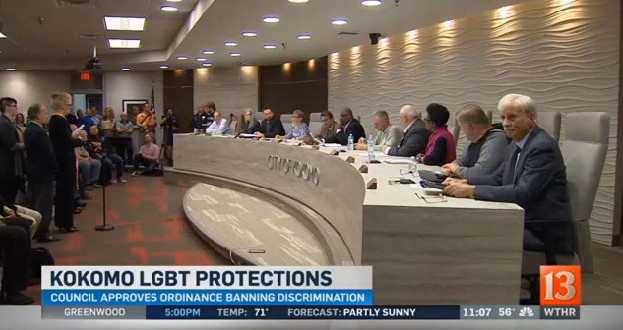 Kokomo has become the latest Indiana community to ban discrimination based on sexual orientation and gender identity. Council members voted 5 to 4 in favor of an ordinance protecting members of the LGBT community after what has been a contentious debate.

The crowd maxxed capacity of Kokomo’s council chambers. By fire code, only 157 could fit inside. Police estimated 300 to 400 more people had to stand outside and await the final vote on the human rights ordinance.

The measure protects lesbian, gay, bisexual and transgender citizens from discrimination. It also bans discrimination based on marital status, age or veteran status.

“It’s not something we want. It’s something we need because it’s only right,” one supporter told council members. “All we are trying to do is live our lives,” another supporter said.

The proposal in Kokomo didn’t come without controversy. “I also have rights. We in the church have rights,” Pastor Steve Branstutter told council members.