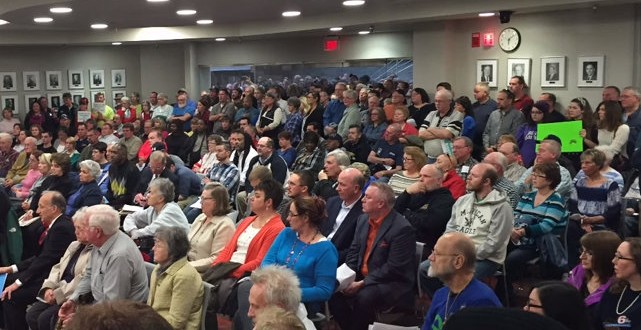 In front of a crowd filling both council chambers and the City Hall lobby, Kokomo’s Common Council voted Monday to approve legislation that would protect lesbian, gay, bisexual and transgender citizens from various forms of discrimination.

After the 5-4 vote in favor of the ordinance’s first reading, the council will hold a second reading at 6 p.m. March 14 in City Hall. Voting against the ordinance Monday were Democrats Bob Cameron and Mike Wyant, and Republicans Cindy Sanders and Tom Miklik. Council President Bob Hayes, Vice President Mike Kennedy, and members Steve Whikehart, Donnie Haworth and Janie Young voted in favor.

Addressed early in the night was the issue of religious protections, which would exempt from the ordinance any religious society or order, association, organization, institution or business that qualifies as a 501(c) organization, one that is officially associated with a church.

The most controversial, and oft-mentioned, issue of the night, though, had to do with sexual criminals abusing the gender identity protections to enter a restroom or locker room of the opposite sex. Similar to the comments made by many in attendance, Demetrius Warren, a Kokomo resident, spoke about his concerns that pedophiles may use the ordinance to abuse children in public restrooms.