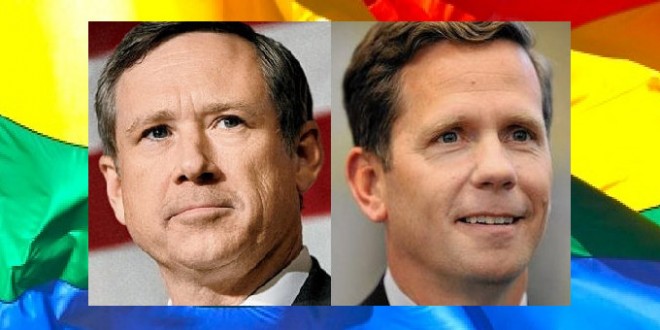 Today the Human Rights Campaign endorsed the reelections of nearly two dozen members of the House and Senate. There are only two Republicans on the list, Sen. Mark Kirk and Rep. Bob Dold, both of whom recently became the sole GOP co-sponsors of the Equality Act in each of their chambers. Via press release:

“From supporting nationwide marriage equality, to co-sponsoring the Equality Act, these members of Congress have demonstrated a strong commitment to equality during their terms,” said HRC President Chad Griffin. “These members of Congress agree with the bipartisan majority of Americans who believe that everyone, including LGBT people, should be able to have a fair chance to earn a living, provide for their families, and live free from fear of discrimination. HRC is proud to support them in their re-election campaigns.”

HRC’s endorsed members in the U.S. Senate have demonstrated a commitment to LGBT equality during their Senate service, including by supporting marriage equality and voting for employment non-discrimination protections (ENDA). They are also all co-sponsors of the Equality Act, the new bipartisan legislation introduced last year to extend existing civil rights protections to LGBT people. They also voted to support the following key issues:

•The Runaway and Homeless Youth Act: An amendment that would ensure essential service providers dealing with runaway and youth homeless youth would not be allowed to discriminate on the basis of sexual orientation or gender identity. Up to 40 percent of homeless youth identify as LGBT, even though they make up only 5 to 10 percent of the overall youth population.

•The Student Non-Discrimination Act: SNDA would expressly prohibit public schools from discriminating against any student on the basis of actual or perceived sexual orientation or gender identity. Federal statutory protections explicitly address discrimination on the basis of race, color, national origin, sex and disability, but not sexual orientation or gender identity.

Previous Rafael Cruz: Not Fighting Same-Sex Marriage Is Like Staying Silent During The Rise Of The Nazis [AUDIO]
Next Concernstipated Women Head Endorses Cruz [VIDEO]