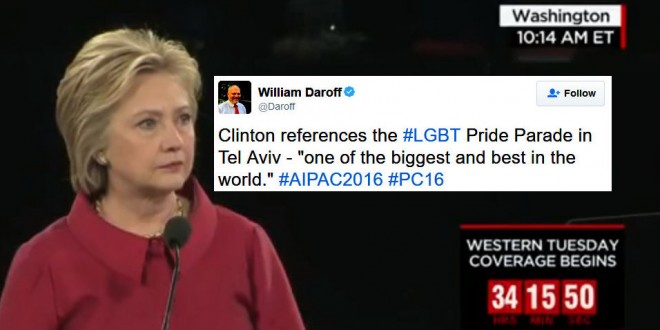 Hillary Clinton today spoke at the pro-Israel AIPAC conference where she slammed Donald Trump as a bully and praised the Tel Aviv Pride Parade as an Israeli example of tolerance. The pride quote:

“We are both nations built by immigrants and exiles seeking to live and worship in freedom, nations built on principles of equality, tolerance and pluralism. At our best, both Israel and America are seen as a light unto the nations because of those values.

“This is the real foundation of our alliance, and I think it’s why so many Americans feel such a deep emotional connection with Israel. I know that I do. And it’s why we cannot be neutral about Israel and Israel’s future, because in Israel’s story, we see our own, and the story of all people who struggle for freedom and self-determination.

“There’s so many examples. You know, we look at the pride parade in Tel Aviv, one of the biggest and most prominent in the world. And we marvel that such a bastion of liberty exists in a region so plagued by intolerance. We see the vigorous, even raucous debate in Israeli politics and feel right at home.”

Also speaking today were all other presidential candidates except Bernie Sanders, who is campaigning in Utah. The Trump portion of Clinton’s speech is below.