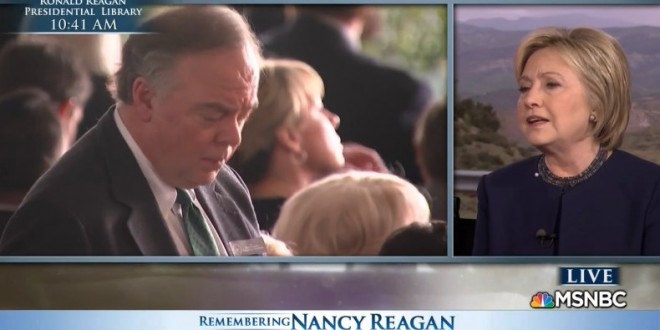 The internet is in a furor this afternoon due to Hillary Clinton’s words about Nancy Reagan and AIDS. Via New Republic:

Hillary Clinton is dead wrong about Nancy Reagan and AIDS. In an appearance on MSBC, Clinton praised the Reagans’ efforts to raise awareness of HIV/AIDS. “Because of both President and Mrs. Reagan, in particular Mrs. Reagan, we started a national conversation when before nobody would talk about it, nobody wanted to do anything about it,” Clinton said, crediting Nancy for “her very effective, low-key advocacy.”

Just how “low-key” was Nancy’s advocacy? So low-key that most people would characterize it as not advocacy at all. After the disease’s first cases were identified in 1981, President Reagan waited until 1987, almost at the end of his second term, to speak publicly about the disease. His communications director, Pat Buchanan, described AIDS as “nature’s revenge on gay men.”

Nancy herself even turned down a request from her old friend Rock Hudson, who was dying of AIDS in 1985, for help in getting a transfer to a hospital with better treatment. She believed the favor would be inappropriate, though the couple reportedly performed many other favors for Hollywood friends.

In reality, the Reagans were infamously, disastrously silent on AIDS—as President, Ronald Reagan spoke more about UFOs than HIV, and didn’t even say the word in a public address until 1987, by which point it had killed tens of thousands of Americans. The virus was quite literally a joke inside the Reagan White House.

Whatever “advocacy” of Nancy’s Clinton is dreaming up here must’ve been low-key to the point of non-existence—just last year it was reported that she ignored her Hollywood friend Rock Hudson’s pleas for help as he himself died from AIDS.

It’s hard for one ugly episode to stand out among so many ugly aspects of the Reagan administration, but Nancy and Ronald’s deliberate silence on one of the defining public health crises of the era is surely near the top of any list. What Clinton is saying isn’t just untrue, but erases the deadly legacy of the Reagan era.

Hillary Clinton seems to need some reminding about what happened in the early days of the AIDS epidemic. The Democratic presidential candidate made polarizing, inaccurate — not to mention offensive — comments on Friday about the role that the Reagans, specifically Nancy Reagan, played in combatting the AIDS epidemic in the 1980s.

Yet, as Teen Vogue wrote this week, Reagan actually turned her back on thousands of people, many of whom identified as lesbian, gay, bisexual and transgender (LGBT), as they died from the virus during her time as first lady.

Similarly, The Guardian reported last year that the former first lady withheld help from close friend Rock Hudson when he reached out to the White House while dying of complications related to AIDS in1985.

While I respect her advocacy on issues like stem cell & Parkinson’s research, Nancy Reagan was, sadly, no hero in the fight against HIV/AIDS

Dear @ChelseaClinton: Please ask your mom to join you for a screening of How To @SurviveAPlague tonight. #TheReagansLetUsDie

Sorry Hillary,You mean well but nothing could be further from the truth than Nancy Reagan (RIP) started a national conversation on AIDS