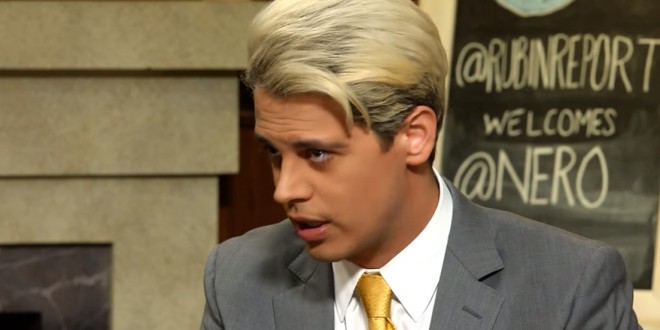 Today Glenn Beck declared that Breitbart homocon Milo Yiannopoulos is the Joseph Goebbels of Donald Trump’s campaign. Goebbels, as you may know, was Hitler’s minister of propaganda. They are very unhappy about this at Breitbart:

Beck’s point of contention was a story Yiannopoulos penned last week regarding Republican presidential front-runner Donald Trump’s retweet of an image of his opponent Sen. Ted Cruz wife, Heidi Cruz, alongside his wife Melania Trump. Yiannopoulos argued there was some merit to Trump’s controversial retweet, which has been adjudicated in the media for nearly a week now. Beck, however, took issue with Yiannopoulos’ defense.

“I don’t want to make this a Donald Trump thing,” Beck declared. “I want to make this about you and our society. And I want you to decide if this is who we are. I believe this is one of the more evil stories I have ever read. What they are pushing in this story is poison to the republic.” Similar to his comparison last month of Breitbart News Executive Chairman and Sirius XM radio host Stephen K. Bannon to the infamous Nazi propaganda minister, Beck also labeled Yiannopoulos’ effort as “Goebbels.”

“Just listen to the way this is written,” he added. “This is Goebbels.” Yiannopoulos, responding to Beck’s on-air meltdown, remarked: “It’s so weird that he’d go with Goebbels when there are so many gay Nazis to choose from! Typically lazy. When people wheel out Hitler and the Nazis it’s generally because they don’t have any arguments left.”

RELATED: Several days ago Yiannopoulos declared that when gays sue businesses for discrimination, “It makes ME want to go out and bash queers.” The host thought that was hilarious. Start at the 8:00 mark below.

What Daddy will do as President

1. Build the wall
2. Fix trade
3. Deport all feminists
4. Change the law so I can be President next