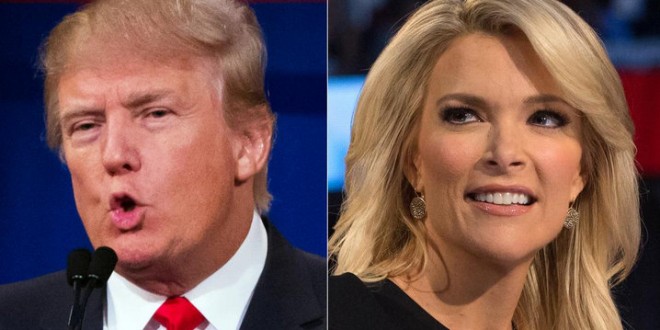 Donald Trump’s vitriolic attacks against Megyn Kelly and his extreme, sick obsession with her is beneath the dignity of a presidential candidate who wants to occupy the highest office in the land. Megyn is an exemplary journalist and one of the leading anchors in America — we’re extremely proud of her phenomenal work and continue to fully support her throughout every day of Trump’s endless barrage of crude and sexist verbal assaults. As the mother of three young children, with a successful law career and the second highest rated show in cable news, it’s especially deplorable for her to be repeatedly abused just for doing her job.

The Trump campaign fired back:

Megyn Kelly is a highly overrated reporter and anchor that constantly disparages Mr. Trump with negative and inaccurate reports. Despite the fact he wants nothing to do with her and will not appear on her show due to her extremely biased reporting, much of the program is about him anyway on a nightly basis. In fact, Fox News has begged Mr. Trump to do a prime time special to be broadcast on the Fox Network, not cable, with Megyn Kelly.

He has turned them down. Likewise, they recently called for an unsolicited and unplanned debate with Kelly as a featured moderator. He turned them down and they immediately canceled. On the Fox debate that Mr. Trump did not do, they received by far their lowest rating. Unlike Megyn Kelly, who resorts to putting out statements via Fox News, Mr. Trump will continue to defend himself against the inordinate amount of unfair and inaccurate coverage he receives on her second-rate show each night.

Highly overrated & crazy @megynkelly is always complaining about Trump and yet she devotes her shows to me. Focus on others Megyn!

Everybody should boycott the @megynkelly show. Never worth watching. Always a hit on Trump! She is sick, & the most overrated person on tv. — Donald J. Trump (@realDonaldTrump) March 18, 2016