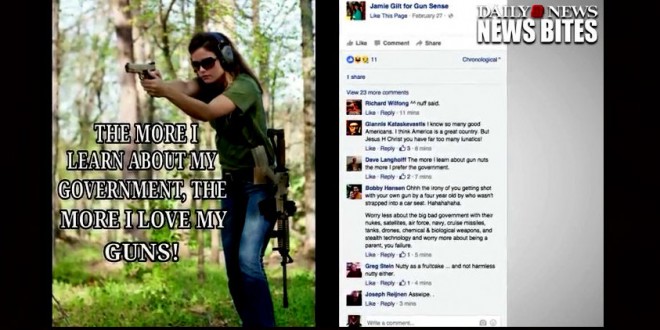 The Florida gun rights activist who was shot in the back by her toddler son earlier this week has a record for shoplifting clothes that she hid in her son’s stroller. Via the Daily Mail:

Jamie Gilt, 30, was arrested by Jacksonville Sheriff’s Department on April 4, 2013 after she was detained by security guards at Dillard’s department store in the town. The prominent gun rights activist was spotted stuffing children’s clothes into her purse and hiding the bag in the child’s stroller. She was arrested by Jacksonville Sheriff’s Department and charged with a felony count Grand Theft Retail.

Officers released her on a bond of $2,503 pending a court hearing. According to her arrest report: ‘The suspect entered the Juniors department of Dillard, selected several clothing items and concealed them in the purse she was carrying. ‘The suspect then placed her purse in the stroller she was pushing and then attempted to exit the store without paying in an attempt to appropriate the property as her own. ‘The suspect was detained by loss protection personnel and the property, totaling $455 was recovered. ‘The suspect was arrested on the above charge and transported to the Duval County Jail.’

On Tuesday, Gilt’s son found a loaded .45 semi-automatic handgun on the back seat of her truck. The round he fired went through the driver’s seat and into his mother’s back, exiting through her abdomen. She’s not yet been charged in the shooting. Gilt had bragged on social media: “All of ours know how to shoot too. Even my 4 year old gets jacked up to target shoot with the .22.”