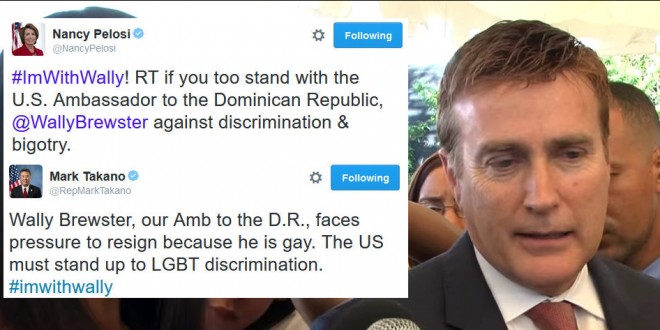 As I’ve reported here several times, openly gay US Ambassador Wally Brewster is under attack in the Dominican Republic, where anti-LGBT activists and the Catholic Church have launched a joint campaign calling for his resignation for spreading “homosexual indoctrination.” Today US House Democrats launched a tweetstorm in support of Brewster using the hashtag #ImWithWally.

Brewster stands accused in part because he dares to include his spouse at official State Department events. Just like any other ambassador would do. Local Catholic leaders and members of the Dominican legislature have taken to the airwaves to denounce Brewster with ugly anti-gay slurs, including copious uses of the Spanish word for “faggot.”

Today’s tweetstorm comes with a letter from House Democrats to the president of the Dominican Republic. Via the Washington Blade:

Dozens of members of Congress have expressed their support of gay U.S. Ambassador to the Dominican Republic James “Wally” Brewster. U.S. Reps. Joe Kennedy (D-Mass.) and Jan Schakowsky (D-Ill.) spearheaded a letter to Dominican President Danilo Medina that describes Brewster as “our outstanding United States Ambassador to the Dominican Republic.” It also indicates their opposition to calls that President Obama remove Brewster from his post for promoting an “LGBT agenda.”

“We write to you to reaffirm that Ambassador Brewster has the strong, unambiguous support of the U.S. Congress and that we will oppose any efforts to remove him from his post,” says the letter. Delegate Eleanor Holmes Norton (D-D.C.) and U.S. Reps. Don Beyer (D-Va.), Donna Edwards (D-Md.) and Chris Van Hollen (D-Md.) and members of the Congressional LGBT Equality Caucus are among the lawmakers who signed the letter to Medina.

Previous Dr. Stabby Predicts “Absolute Destruction” For GOP If Trump Is Not Awarded Nomination [VIDEO]
Next CNN Commentator Vs Trump Supporter: He Cheats On His Wife And You Call That Integrity? [VIDEO]