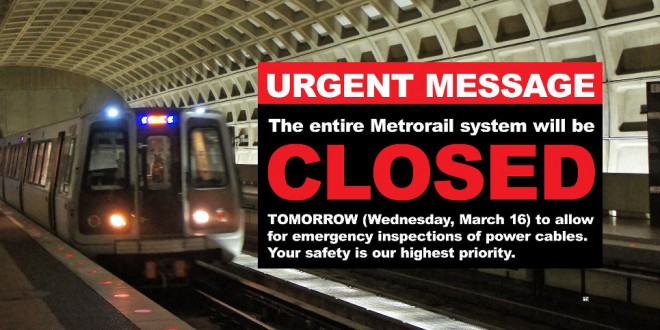 DC Metro To Close For 24 Hours

Hundreds of thousands of federal workers will have to find another way to work tomorrow. The feds say this has nothing to do with terrorism. NBC News reports:

The entire D.C. Metrorail system will be shut down Wednesday for an emergency investigation, two sources tell News4. Metro officials are expected to announce at 4 p.m. Tuesday that they need to inspect as many as 1,200 pieces of equipment, as News4’s Tom Sherwood was first to report. The U.S. Office of Personnel Management said Tuesday afternoon the agency is looking at how federal workers’ schedules Wednesday may be affected by the shutdown. “OPM will have guidance for agencies on the status of the federal government shortly,” a statement from OPM said.

Weekday ridership on the DC system averages around 750,000.