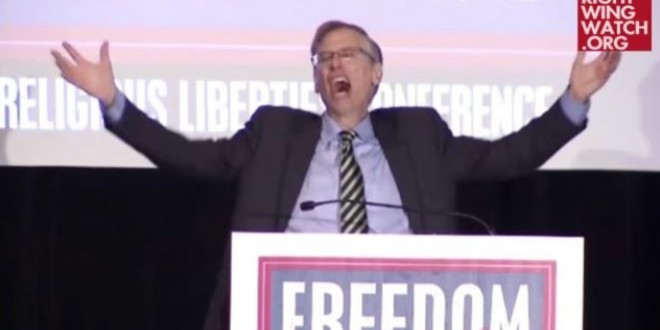 The pastor who called for executing homosexuals shortly before interviewing Ted Cruz is back with more Christian Love™. Brian Tashman reports at Right Wing Watch:

Swanson, who has spent years calling for a boycott of Girl Scouts cookies and accusing the organization of promoting communism and turning girls into lesbians, said that Girl Scouts leaders have violated Jesus’ teaching that it would be better for someone to have a millstone hung around their neck and thrown into the sea rather than cause a child to sin.

This instruction, Swanson said, should be applied literally. After criticizing the Girl Scouts because it “promotes lesbianism” and movies like “Harry Potter” and “How To Train Your Dragon” for featuring “homosexual mentors provided to little boys” — a criticism he detailed at the rally with Cruz — Swanson said that people must put into effect Jesus’ teaching against debasing children with such “movies that promote homosexuality or organizations that promote homosexuality.” “You’ve got to take what He says and you have to apply it,” Swanson said.