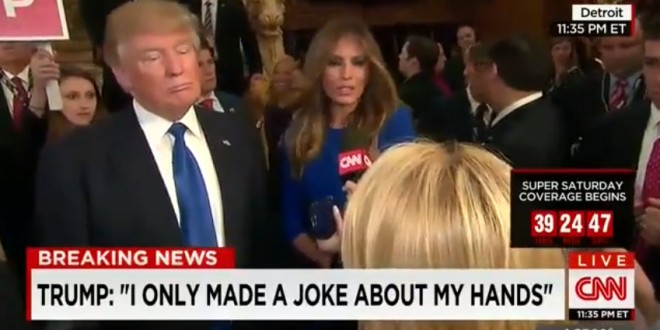 On CNN after the debate, Dana Bash asked Donald Trump ever-so-reluctantly about his dick joke. Less than 10 minutes into the debate, Trump made a crack about his manhood to return fire at Marco Rubio for making a joke about it.

“I can’t believe I’m gonna ask you this question,” Bash asked, “but do you realize you’re probably the first person in American history, maybe world history, to make a joke about your you-know-what on a debate stage?”

Trump coyly said he was only talking about his hands, literally saying, “Look at these hands, aren’t they beautiful? I have very powerful hands, large hands. Relatively large hands.”

Previous Red-Caped Catholic Loons: We Won’t Come Back To CPAC If Log Cabin Republicans Are There Again
Next TRAILER: Ghostbusters