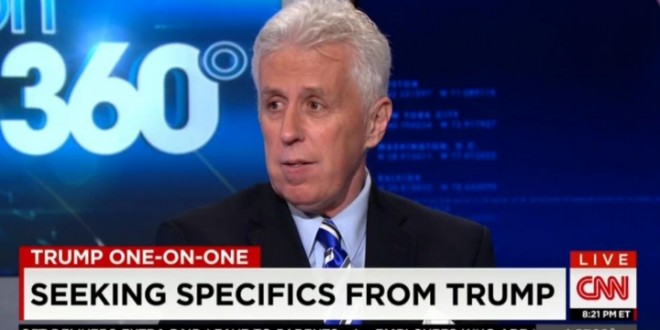 CNN’s favorite pro-Trump pundit Jeffrey Lord frequently insists that racism isn’t at all present in Donald Trump’s presidential campaign and that liberals are the true racists, once even making the absurd claim that the Ku Klux Klan was a “progressive” group. Lord continued to push his ahistorical case in an interview yesterday with Houston broadcaster Sam Malone, this time linking the recent demonstrations against Donald Trump to the “stunts” by opponents of the Vietnam War, including the protest at Kent State University where four demonstrators were killed. He also linked the anti-Trump protests to alleged violence from Occupy Wall Street, Black Lives Matter and the labor movement. “They are violent,” he said. “The DNA of violence is right there with these people and this political philosophy.”

RELATED: Earlier this month I reported on Lord getting schooled on this same topic by Van Jones.