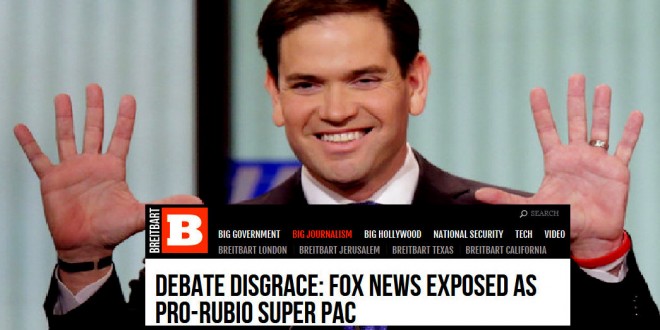 Breitbart complaining about media bias will never stop being funny. They write:

Another Fox News debate, another two hours of proof that the “fair and balanced” network is nothing more than a super PAC for Sen. Marco Rubio, who, by the way, had a terrible night. In their naked pursuit of Donald Trump’s scalp, moderators Chris Wallace, Bret Baier, and Megyn Kelly used every cheap trick in the book.

None of the other candidates faced dramatic graphics. Trump did. None of the other candidates faced video of past statements.* Trump did. Trump was never asked to attack his rivals. On at least three occasions, Trump’s rivals were invited to attack him. Fox News’s brand and reputation is already in freefall. Thursday night, in service to Marco Rubio and the Republican Establishment, Fox News stooped lower than NBC News or CNN — something many of us never thought possible.