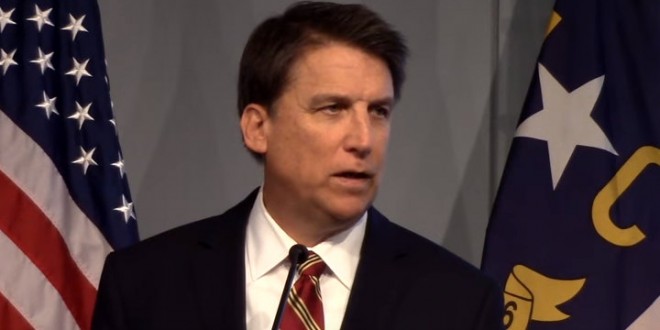 Gov. Pat McCrory signed House Bill 2 into law shortly before 10 p.m. Wednesday, overturning Charlotte’s controversial transgender ordinance. McCrory’s office released a statement Wednesday night, saying “the basic expectation of privacy in the most personal of settings, a restroom or locker room, for each gender was violated by government overreach and intrusion by the mayor and city council of Charlotte.” The governor also said the “radical breach of trust and security under the false argument of equal access not only impacts the citizens of Charlotte but people who come to Charlotte to work, visit or play. This new government regulation defies common sense and basic community norms by allowing, for example, a man to use a woman’s bathroom, shower or locker room.”

McCrory’s statement and tweets tonight only mention the so-called “bathroom issue” – but in fact the bill excludes LGBT citizens from protections in housing, employment, and public accommodations. The bill also overturns not only the LGBT rights bill in Charlotte, it repeals similar laws in eight other North Carolina municipalities