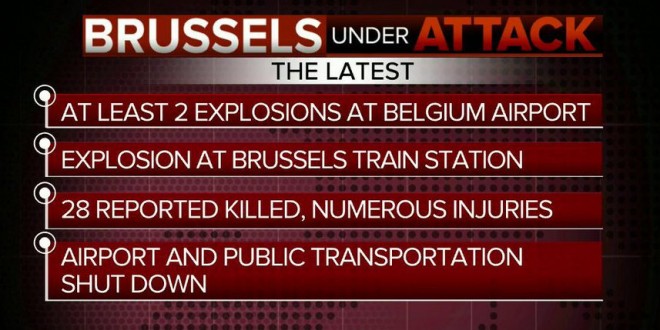 Many people have been killed or seriously injured in terrorist attacks at Brussels international airport and a city metro station, Belgium’s PM says. Two blasts tore through the departures area of Zaventem airport shortly after 08:00 local time (07:00 GMT).

An hour later, an explosion hit Maelbeek metro station. The airport and whole transport system are closed. The attacks come four days after Salah Abdeslam, the main fugitive in the Paris attacks, was seized in Brussels.

Prime Minister Charles Michel called the attacks “blind, violent and cowardly”, saying they were a “tragic moment in our country’s history. I would like to call on everyone to show calmness and solidarity”. The Belgian prosecutor said it was “probably a suicide bomber” who struck the airport.

According to news agencies, 13 people were killed at the airport, and 15 in the subway bombing, while 30 others were wounded. Prime Minister Charles Michel of Belgium said there were “numerous” dead. “We were fearing terrorist attacks, and that has now happened,” he said. At least one of the two explosions at the airport appeared to have been set off by a suicide bomber, officials said.

The attacks, a vivid illustration of the continued threat to Europe, occurred four days after the capture on Friday of Europe’s most wanted man, Salah Abdeslam. Mr. Abdeslam is believed to be the sole survivor of the 10 men who were directly involved in the attacks that killed 130 people in and around Paris on Nov. 13.

Mr. Michel issued an extraordinary appeal to the population to “avoid all movement,” as the authorities braced for possible further attacks. The French government ordered 1,600 extra police officers to patrol the nation’s borders, including at train stations, airports and ports. Prime Minister David Cameron of Britain called an emergency meeting of ministers.