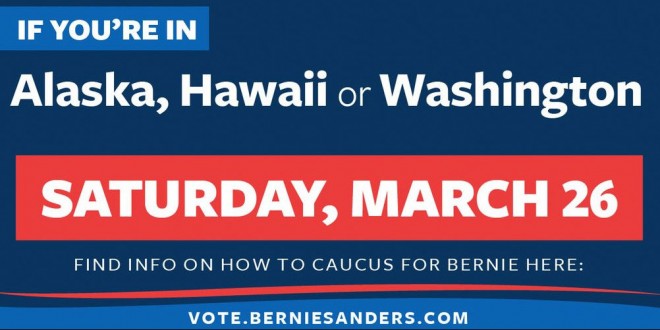 Washington state, Alaska and Hawaii all hold Democratic nomination contests on Saturday, and Sanders has a fighting chance for a sweep. All three states are holding caucuses, an activist-heavy format that Sanders has thrived on. Washington state and Alaska are also heavy on white Democrats, a core Sanders constituency, and have relatively few African Americans. Hawaii is a wild card, given a lack of polling and campaign attention, but Clinton surrogates are already working to deflate expectations.

The opportunity comes packaged with peril, however. In a race to 2,383 delegates, Clinton leads Sanders 1,690 to 946. (Even if Superdelegates are discounted, she’s still ahead by 303 pledged delegates.) And after getting clobbered in the Midwest and beaten in Arizona, Sanders is in danger of sliding back into irrelevance if he can’t score wins in the states that lean in his favor. Win or lose, Clinton or Sanders will sit with Saturday’s consequences for a while. Other than April 5’s tilt in Wisconsin, the race goes into semi-hibernation, without a major contest coming before New York’s 291-delegate scrap April 19.

A total of 142 delegates are up from grabs today with 101 of them in Washington state.