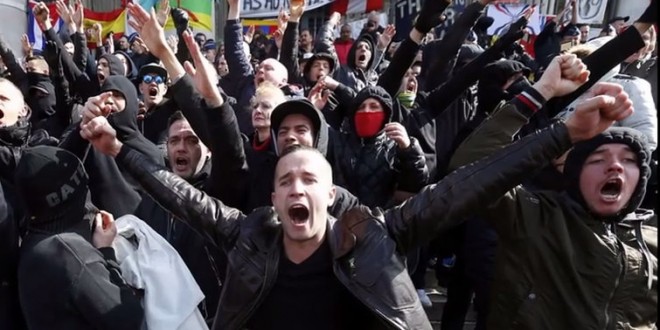 Though organizers postponed a Sunday march in the Belgian capital out of security fears, those who gathered at Brussels’ Place de la Bourse were confronted by protesters raising their arms in Nazi salutes and shouting anti-immigrant slogans.

The gathering, which took place in a commercial district in the capital, started out peacefully with mourners laying flowers at the foot of the stairs leading to the Brussels Stock Exchange.

The mood changed at about 2:45 p.m. when several hundred men — most of them dressed in black, a handful of them with their faces totally or partially obscured, and many of them carrying alcoholic beverages — arrived on the square.

One demonstrator sparked a flare, and others lit firecrackers in the square. One group unfurled a white banner that said “FCK ISIS” and “Casuals Against Terrorism.” It’s unclear if the groups are related, but Casuals United is a British far-right group affiliated with the English Defence League, which opposes the spread of Islam and Sharia law.

The nationalist demonstrators chanted “We are at home,” and there were minor scuffles as some people at the site trampled through the flowers, flags and balloons that make up the memorial for those killed in Tuesday’s terrorist attacks.