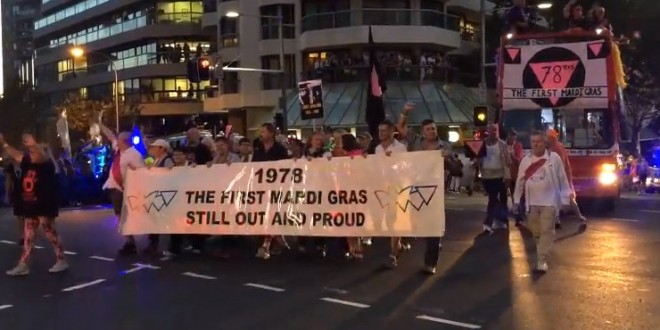 As 178 floats assembled near Hyde Park and excited revellers made the final touches to their bright, feathered and stiletto-ed outfits, Sydney was ready to party. Thanks to spectacular weather, the 38th annual Sydney Gay and Lesbian Mardi Gras was especially dazzling, with glitter and sequins reflecting a radiant sun.

Thousands lined the streets and looked on from balconies above Oxford Street, waiting excitedly for the revving motors of Dykes on Bikes to signal the official start of festivities. The dulcet tones of the Village People, Katy Perry and Lady Gaga could be heard floating over Hyde Park.

And when the 12,500 participants finally did come skipping, dancing and rolling down Oxford St, the full spectrum of queer diversity was on display as firefighters danced to Billy Joel’s We Didn’t Start the Fire, rainbow families followed a Gayby Baby float, and both ends of the political spectrum made their colourful statement on the famous strip.