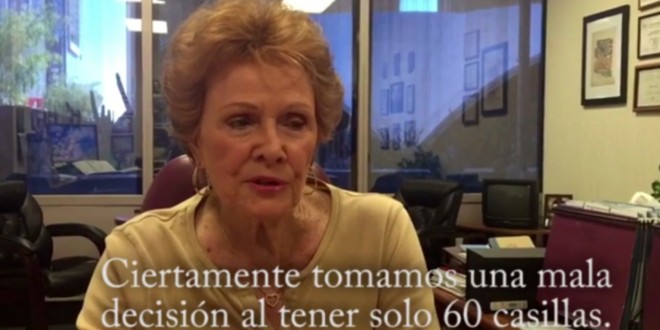 News outlets nationwide have reported on the mess in Arizona’s Mariciopa Country, the state’s most populous, where primary voters waited for hours due to a 70% reduction in the number of polling places. The GOP official who made that call says she won’t resign. Via the Arizona Republic:

Maricopa County Recorder Helen Purcell took responsibility for the hours-long lines at the polls Tuesday that enraged voters and had some calling for her to step down over her handling of the presidential preference election.

“We certainly made bad decisions, and having only 60 polling places, didn’t anticipate there would be that many people going to the polling places,” she said. “We were obviously wrong — that’s my fault. So we’ll certainly look at that for future elections.”

But Purcell said she would not step down in the wake of Tuesday’s debacle. “I’m not going to resign,” she said, as protesters gathered outside her downtown Phoenix office to call for her resignation or recall. “And the electorate is free to do whatever they want to do.”

Hours later, Phoenix Mayor Greg Stanton issued a request for a U.S. Department of Justice investigation. He pointed out that county officials allocated one polling place for every 108,000 residents and said that Anglo communities had more polling sites per resident.

Previous TRAILER: A Road To Home
Next ARGENTINA: Obama Does The Tango [VIDEO]