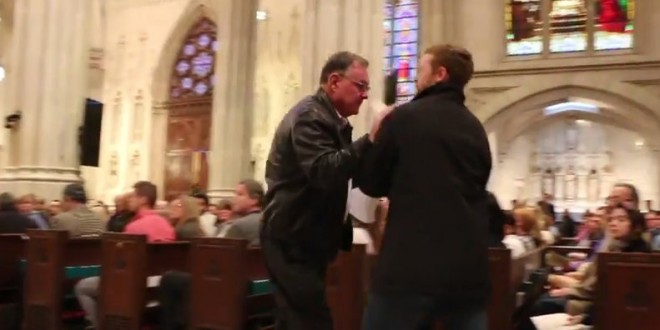 A teacher from North Carolina was arrested after he and a handful of animal rights activists disrupted the noon Easter Mass at St. Patrick’s Cathedral.

Security guards wasted no time sprinting toward Jacob Martin during the packed Midtown service, ushering the 23-year-old down the empty aisle as he yelled into a bullhorn, according to a video of the incident.

“Just as the priest began, someone got on a megaphone in the middle of Easter mass at St. Patrick’s,” witness Stephanie Stark tweeted. “Little girl next to me was freaked out.”

Shocked worshippers watched in silence as police officers met three additional protesters with the group Collectively Free who followed Martin out the door.

A demonstrator wielding a camera captured security guards running through pews to grab the remaining activists by the arm as they chanted “Easter is a time for love. No more shedding animal blood.”

Worshipers attending Easter Mass at St. Patrick’s Cathedral got the scare of their lives when a band of unruly protesters disrupted the event. “I thought they were going to blow themselves up,” worshiper Carol Forester, 50, confessed.

About 20 minutes into the Rev. Damian O’Connell’s noon Mass, protester Jacob Martin, 23, rose out of his seat in the center of the church and started to walk down the aisle while shouting into a bullhorn that “only the devil” could create “animals capable of love and joy just so humans can make them suffer and die.”

Martin, who is a former University of North Carolina student and identifies as a Christian, also had a camera strapped to his chest, which worshippers believed was an explosive.

From the protest organizer: “Ham is a big thing on Easter, so that’s why we decided to bring those voices to the public.”

Previous CNN Commentator Vs Trump Supporter: He Cheats On His Wife And You Call That Integrity? [VIDEO]
Next BREAKING: White House On Lockdown After Shots Fired At US Capitol Building Visitors Center