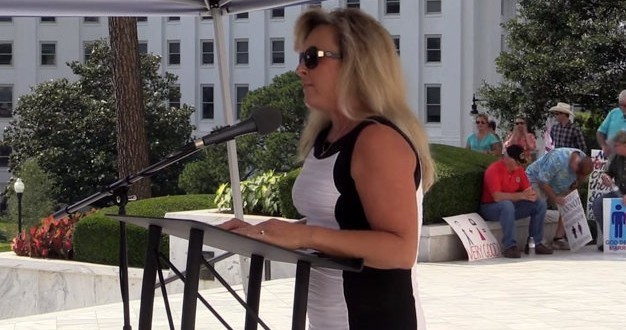 “It is bad enough that these corporations have put their weight behind same-sex marriage. But when Georgia’s governor caves to the radical gay agenda by vetoing a bill that does nothing more than protect the religious freedom of those who have sincere religious objections to same-sex marriage, we must ask whose interests he truly represents: the people of Georgia or those of the corporations who showed themselves as enemies of religious freedom and traditional values.” – Kayla Moore, president of the Foundation For Moral Law. Kayla is married to Alabama Supreme Court Chief Justice Roy Moore.

RELATED: The Foundation For Moral Law openly advocates for replacing the US government with a “biblical theocracy.” Below is their mission statement.

We believe in one God—the Father, the Son and the Holy Spirit, and the truth of the Holy Scriptures, the infallible Word of God.

We believe that Jesus Christ, the Son of God, died on the cross and rose again to life so that all who believe in Him, by faith, will be forgiven of their sins, and gain eternal life in Heaven. That He ascended to the Father and will come again to judge the living and the dead.

We believe that the United States of America was founded on the laws of Nature and Nature’s God, and that Almighty God is sovereign over the affairs of men, exercising jurisdiction over the family, church, state, and each individual. We believe that God is the Creator and Author of life, liberty, and the pursuit of happiness.