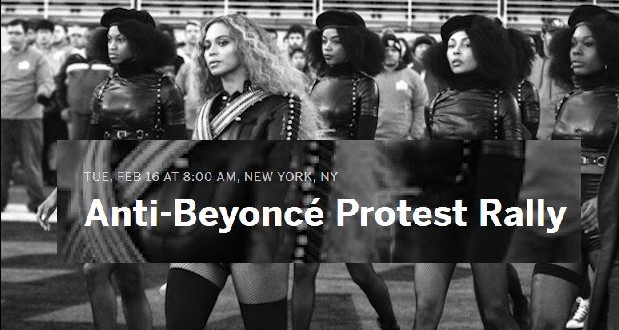 Teabagistan is been up in arms all week about Beyonce’s tribute to the Black Lives Matter during the Super Bowl halftime show. Next week there will be a protest outside NFL headquarters in Manhattan. From the New York Daily News:

Beyoncé haters are ready to get in formation. The anti-Beyhive is planning to protest the “Drunk in Love” singer outside of the NFL Headquarters in Manhattan on Feb. 16, the same day tickets for her “Formation” world tour goes on sale.

“Are you offended as an American that Beyonce pulled her race-baiting stunt at the Superbowl?” the event description said. “Do you agree that it was a slap in the face to law enforcement?” The rally’s organizer is calling Beyoncé’s show “hate speech” and “racism” at the Super Bowl because of its references to the Black Panthers and Black Lives Matter.

Former Mayor Giuliani slammed the show on Monday, calling the routine “outrageous” for inserting politics into the NFL. “This is football, not Hollywood, and I thought it was really outrageous that she used it as a platform to attack police officers who are the people who protect her and protect us, and keep us alive,” he said.

The protest page is here.