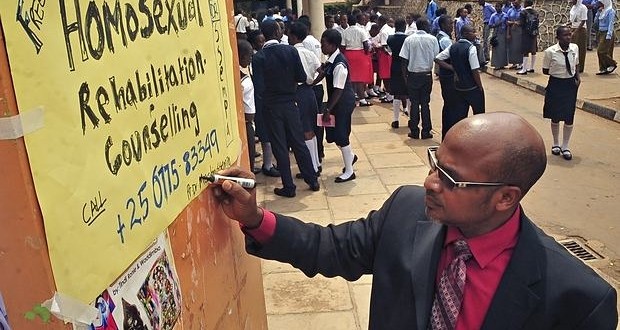 Last April the Center For Constitutional Rights surprised us with the revelation that Ugandan Pastor Martin “Eat Da Poo Poo” Ssempa is a US citizen and is therefore subject to a subpoena in their civil lawsuit against Scott Lively, who stands accused of crimes against humanity. The Ssempa subpoena was issued along with a $1900 check to cover his travel expenses to Massachusetts.

Normally quite prolific on Twitter, where he would regularly troll me with denouncements of whatever the pro-LGBT news of the day was, Ssempa vanished from social media immediately upon the issuance of his subpoena. Last night I once again searched the web for Ssempa after coming across this update in the Scott Lively case from 76 Crimes:

The next major court date is 14 September 2016, for a hearing on a motion for summary judgment, which will determine whether the case should proceed to a full trial before a jury or will be decided by the judge without a trial. Before then, however, there will be a lot happening: Lively must produce his expert reports by 15 March 2016; and all depositions of both parties’ experts must be taken by 15 April 2016. Between May and July, the parties will be submitting their written arguments on the question of summary judgment, which will serve as the basis for the arguments that will be presented at the court hearing in September.

Ssempa’s most recent tweet came on May 9th 2015. In September the blog Uganda Gospel Life posted this:

Recently, Pastor Ssempa after a Destiny Leadership Expo earlier this year when he taught on the need to influence the media, got a new TV show on Urban Television that became an instant success. However, only a few weeks into airing what had then become a daily show, Martin Ssempa made an exit that was not explained to us. We therefore started wondering if Pastor Ssempa had travelled overseas because that would be the only logical reason for his absentia. What we discovered after months of silently asking numerous questions is that Pastor Martin Ssempa may in fact be in hiding.

The question then to ask is, why has Pastor Martin Ssempa who is a dual citizen of the USA and Uganda not appeared after this subpoena? Is he in hiding and where? Is he in danger? Should Uganda as a nation make noise about this or merely keep silent and watch? Should we trust that the USA Center for Constitutional Rights (CCR) only want his testimony? Or, is this their only chance of getting back at him and the whole resistance against the gay-agenda in the pearl of Africa?

It’s apparent that Ssempa does indeed intend the defy the subpoena, which is more than curious considering we’d expect him to leap at the chance to defend Scott Lively. We must now wonder if Lively knows of his whereabouts. I’ve reached out to the Center for Constitutional Rights to see if they have more information.

Previous Tony Perkins: If “Godly” Ted Cruz Is Not Elected, There May Never Be Another Election In America [VIDEO]
Next Ryan T. Anderson: Love Does Not Equal Love