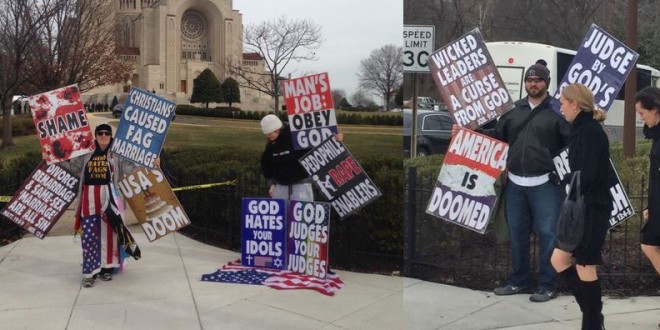 This morning members of Westboro Baptist are picketing outside the funeral of Antonin Scalia, who “well knows and understands the folly and fatality of that Catholic Monster he spent his life time nourishing and worshipping.”  Because, presumably, Scalia is now in hell with billions of other Catholics.

Today’s protest is rather notable in light of the Supreme Court’s landmark 2011 ruling in Snyder V Phelps which affirmed the right of Westboro to picket funerals even if such protests are meant to “intentionally inflict emotional distress” upon the mourners. Scalia sided with the 8-1 majority in the case, with only Justice Samuel Alito dissenting.

The suit was brought by the family of a US Marine killed in Iraq, Matthew Snyder, whose 2006 funeral was picketed by Westboro members bearing signs that read “Semper Fi Fags” and “Thank God For Dead Fag Troops.” Snyder was not believed to have been gay.